As you might know I love to speak about my passions. As CEO of Ace Jewelers Group of Amsterdam,www.AceJewelers.com I have been invited to speak during the Webwinkel Vakdagen 2016 (#WWV16). I will speak about Customer Experience in the luxury industry on Wednesday January 20th, 2016 in Utrecht, The Netherlands. 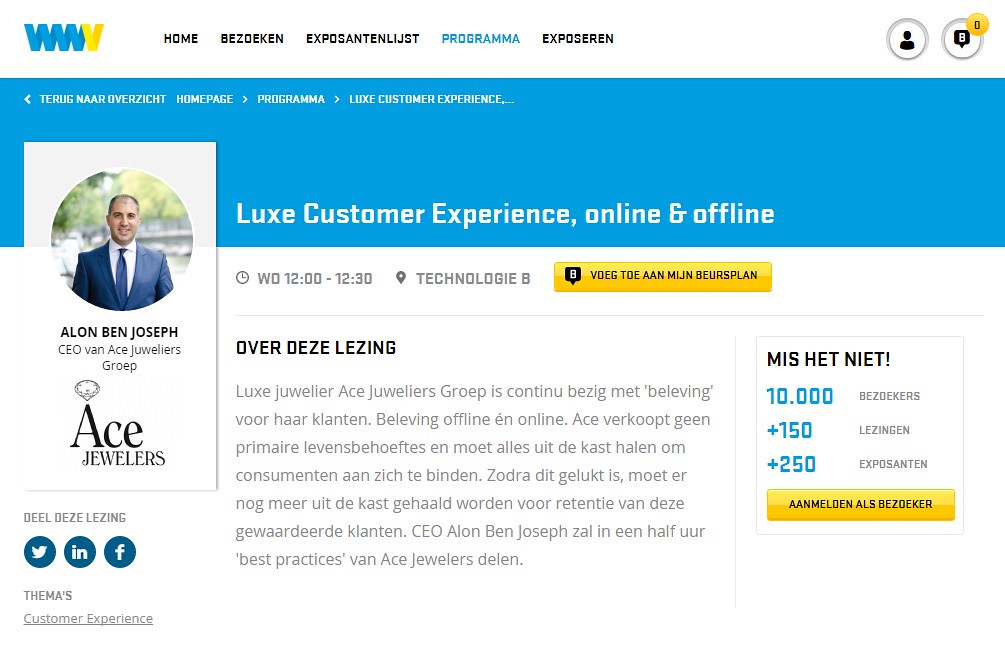 The Webwinkel Vakdagen, also know as WWV, is the leading event in the Dutch Internet industry and this is the 10th anniversary edition. In 2006 it was the first time I have attended and it is amazing to see how the fair has grown to an industry meet-up you can not miss! The title of my presentation is: Luxury Customer Experience, online and offline. I will elaborate on critical success factors of Ace Jewelers in creating the ultimate customer experience in the luxury industry we operate in.

Hope to see you at my lecture at noon on the 20th of this month.

For an overview of all my speaking engagements, please visit this page.

Launched six years ago, the Global E-Commerce Summit is the leading international event that focuses on the most important trends and developments in global e-commerce, cross-border trading and omni-channel retail. After editions in Amsterdam and Monaco, the event settled on Barcelona, which has now been the home of the summit and the awards ceremony for the last four years.

In 2014 the theme will be: The Next E-Commerce Revolution: No Borders, No Channels. 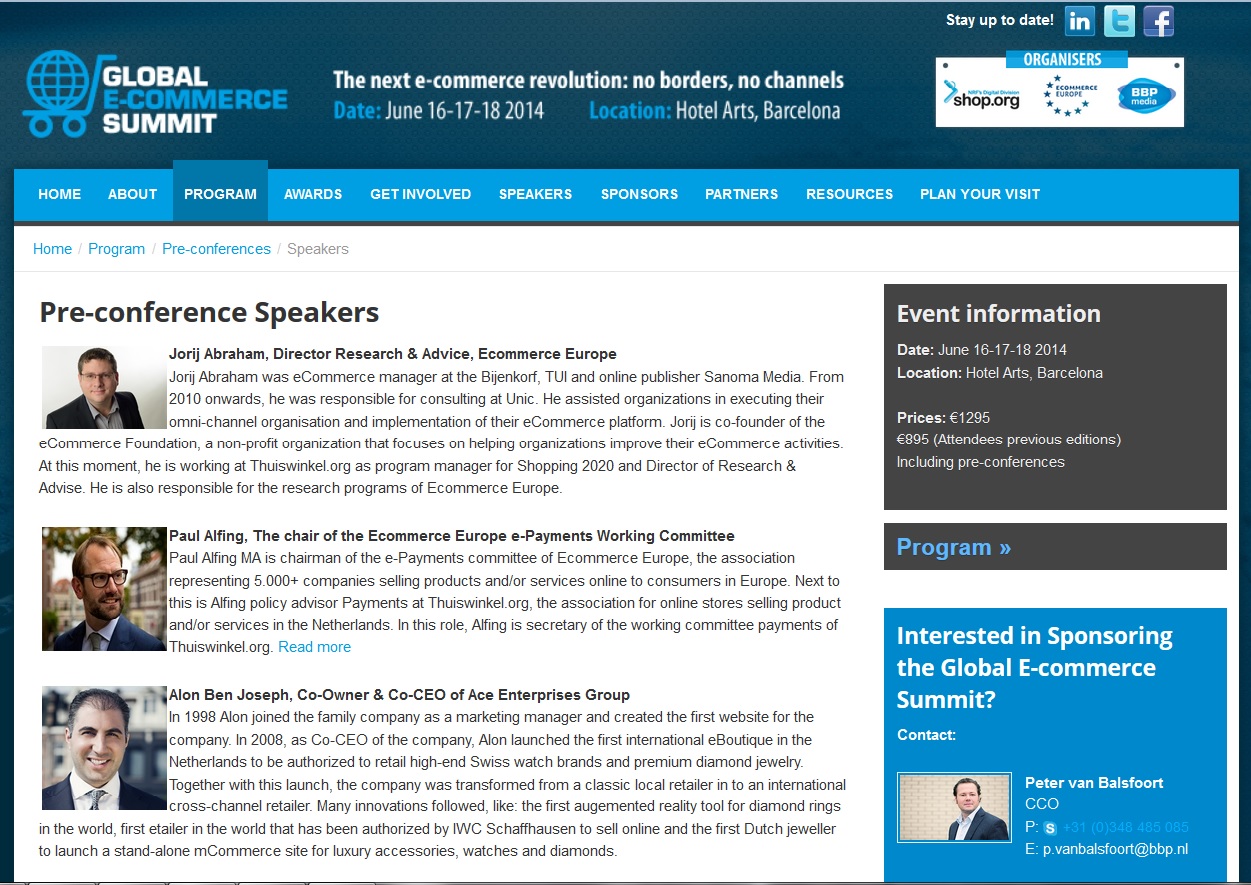 In 1998 Alon joined the family company as a marketing manager and created the first website for the company. In 2008, as Co-CEO of the company, Alon launched the first international eBoutique in the Netherlands to be authorized to retail high-end Swiss watch brands and premium diamond jewelry. Together with this launch, the company was transformed from a classic local retailer in to an international cross-channel retailer. Many innovations followed, like: the first augemented reality tool for diamond rings in the world, first etailer in the world that has been authorized by IWC Schaffhausen to sell online and the first Dutch jeweller to launch a stand-alone mCommerce site for luxury accessories, watches and diamonds.

On June 16th, 2014 Alon Ben Joseph will speaking during the Pre-conference e-Payments track of the Global Ecommerce Summit about “Challenges of a high-end jeweller with online payments.”

See more of Alon’s former and future speaking engagements on this dedicated page.

As you know I created this blog to share things that interest me and fascinate me… Today I want to share the exhibit of my dear friend and (art) mentor Rob Wagschal: “Two friends who first met in Forcalquier and whose work has been richly influenced by Provence will exhibit together for three weeks in July at the Galerie Passère in Forcalquier. In a sense, both have found a second career as artists thanks to their experiences in the region. Formally as well as thematically, Rob Wagschal’s assemblages and Tim Donoghue’s collages can be seen as an aesthetic dialogue that evokes some of the central issues of modernism.

It has been a long while since I took the time and sit down to write some posts about my passions. I haven’t taken the time as I put almost all my energy in my passions: Ace Jewelers & eBusiness. We are soon launching 3 (three) new eBoutiques… I will post more about it when we go live. On top of that we are publishing a book this summer: “The ACE List – Volume I” and today we received our ISBN number: 978-90-819228-0-7.

For this book we did a photo shoot on the Museumplein in Amsterdam and this picture will be next to the introduction I wrote for the book: Do you like it? I liked it so much, I decided to use it as my new profile picture on all my pages on the social networks. Please connect with me on these networks, just check the ones I am on in the side menu of this blog 🙂

Have a wonderful weekend.

I have been asked to speak at the first Dutch business event about Mobile Commerce, named: mCommerce Event 2012 in Amsterdam. The text in the image, says:

“Case Study Ace Jewelers: “Why buy a wrist watch if you can read the time from your SmartPhone?”

The first jeweller with an eBoutique and since 2011 also a seperate mBoutique.
During the M-commerce congres Mr. Alon Ben Joseph will share his vision on luxury retail. His presentation will be about his vision of the past, current state and future of  luxury retail.”

Please come and join the discussion on January 19th, 2012 in Pakhuis De Zwijger in Amsterdam. Get your tickets via: http://www.mcommerce-event.nl and join the buzz via: @Mcommerce_Event.

I hope to see you all there 🙂

This error message is only visible to WordPress admins

Make sure this account has posts available on instagram.com.