The last two years I have been asked many times if I believe that the so-called ‘smart watches‘ and ‘wearables‘ will conquer the valuable ‘wrist real estate‘ from the Swiss watch brands on all of our wrists.

My answer is always and unconditionally: NO! 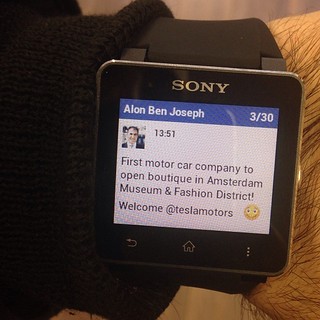 Ace Jewelers was the first Dutch jeweller to sell smart watches. Here is the Sony Smart Watch on my wrist.

I hear you saying: “This Alon is not objective! Not only is he a jeweller and salesman of watches, but also an enormous WatchFreak!” I am indeed guilty of selling watches and privately a huge watch fanatic, but I do believe that I am objective and able to give an answer to this question as I have always ‘lived’ in this industry (the watch industry) and also grown up with electronics.

As a little kid I (born in 1979) I grew up with the resurrection of the Swiss watch industry after it was hit hard in the 1970s. So hard, that it almost whipped out the complete Swiss watch industry (due to the Quartz Crisis). Hence, my first watch at an age of four (in 1983) was a Swatch (couldn’t even read time yet) and have worn the first Casio G-shocks out there. The feeling is creeping up that the complete watch industry (not only the Swiss, but also the Japanese, Chinese and German for that matter) is on the brink of another ‘Quartz Crisis’! (Read more about this crisis: Wikipedia, Haute Horlogerie Assocation and Calibre 11 Blog.) 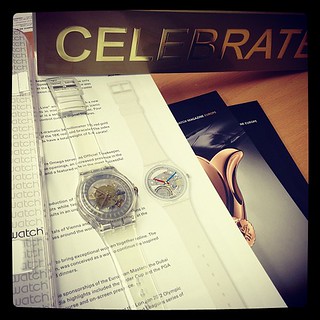 Do I think that this is true? No, I do not think we will have a huge ‘live-threatening crisis’ for the (luxury) watch industry on our hands, but I do think that the luxury industry (watches, fashion, cars, etc) are lagging, frozen in their old ways and will get hit… Hit hard. So, it might be a bold statement, but I do dare to say that the luxury industry and the watch industry in particular are on the brink of a huge revolution, after having a great, smooth and exponential growing evolution (for at least three decades)… We all know that (smooth) evolutionary periods are abruptly interrupted by (unexpected and) game-changing revolutions.

Why do I still sound so positive, if that is my opinion/view? Well, I believe that as society, consumer behavior and norms & value change, and they are changing faster than ever before, we will see that we will utilize our ‘wrist real estate’ better… We have two wrists 🙂 So, it doesn’t mean that consumers will throw away their mechanical watches and automatically swap it to a digital smart watch/device. I also expect that eco-friendly smart watches will not only be powered by, for example solar power, but maybe also by (kinetic) mechanical automatic movements… Hybrid watches… Remember the Japanese Seiko Kinetic movements or  the Swiss AutoQuartz movements made by ETA (and used by Omega, Tissot and Swatch for example)?
But, on the other hand, I do believe that the marketing and communication needs to change by the premium brands that manufacture ‘old school’ mechanical watches. As the newest generation that know how to use smart phones and tablet computers before they even know how to crawl or feed themselves, will not even want to wear anything (besides some 3D printed jewelry maybe) on their wrists, arms or any body part for that matter… The sole reason that the Swiss (high-end) watch industry recovered after the Quartz Crisis, is because watches become an even bigger status symbol that it was before the Quartz Crisis in the 1970s and that it gave the owner a romantic sense of feeling and nostalgia. I do not think this will fade with the growing usage of smart devices markets.

I have been walking around with the idea to write an article about this subject for quite some while now. As the editor-in-chief of my favorite (and the best trade magazine in the watch industry) Europa Star, Mr. Pierre M. Maillard, always writes such cutting edge and precise views about the watch industry, he triggered me not only to write my own two cents, but also share his article: “Mechanical Intelligence” by P.M. Maillard for September 2014 edition of the English Europa Star Magazine. Although Maillard hardly refers to other articles in his own, he starts of with another article in this one:

“An interesting article that appeared recently in The Economist (“The high-tech world of old-world watches”) offered a different take on the implications of the approaching tidal wave of smart watches. The premise of the article is that there is a great deal more innovation in the art of mechanical watchmaking than in supposedly “smart” watches.
According to The Economist, smart watches are no more than a new way of presenting and adapting existing functions and applications in “a mash-up of phone, activity-tracker and music-player.”
And despite the fact that almost two million were sold last year, Endeavour Partners in the USA found that one-third of buyers tire of them rapidly, and simply stop wearing them within six months.
The Economist takes the contrary view that true innovation is to be found in good old-fashioned mechanical watchmaking, stimulated by the “vast profits still made in and around Switzerland’s ‘watch valley’,” and by the “unexpected uses of untraditional materials, that may in time transform the industry.” quoting Maillard in the latest edition in Europa Star Magazine. He indicated that he is skeptical if “the new Messiah Apple” will succeed to kill off the Swiss watch industry single-highhandedly, as he continues:

“Although some watchmakers dismiss out of hand any risk of being swallowed up by the technology monster, and others already fear for their lives, the true outcome will probably lie somewhere between the two.”

Maillard warns the Swiss watch industry that “it must avoid seeking refuge in denial, as it did during the famous quartz crisis, which came close to sinking the entire industry. Arrogance is a poor counsellor. Nevertheless, the idea that everyone and everything should be constantly connected (because in addition to smart watches we should expect to see smart refrigerators, smart cars, smart baby’s bottles, etc.) will eventually be undone by its own ubiquity.” And, he finishes his great article with a positive note: “Not everyone wants to be permanently plugged in, and the number who do is probably diminishing. One of the virtues of traditional watchmaking is the mechanical poetry that connects us not to the internet but to the cosmos, to the mysteries of time and beauty. And therein perhaps lies its greatest strength.“ UP by Jawbone bracelet.

You might wonder what I do with my two wrists. Well, I often (but not always) wear two wrist watches, one on each wrist. It has nothing to do with telling time or having access to two different time zones simultaneously, but do so exclusively due to my obsessive love for the art of watchmaking. Yes, I do own pocket watches and no, I never wear them. And, yes, I do love technology and innovation too. It took me a while to decide if I do want to be a (volunteer) victim of the all new all connected world and I decided that I do and I decided to test a UP by Jawbone bracelet. I just ordered my first one on Amazon yesterday. But, I am also one of these consumers that Maillard refers to: I do not always want to be online. I think we all have this contradiction in us: we often are ‘stuck in this rat race’ of being on top of things all the time (read: super connected and online), where-as (for example in the weekend or during holidays) we embrace and cherish our (complete) downtime (read: unconnected and offline).

To conclude this article/post/my ‘two cents’: I do not think that smart watches like the iWatch by Apple and/or wearables like the UP by Jawbone will kill the premium watch industry. But, I do think that if the watch industry does not at least acknowledge and even better, embrace the new technologies and listen very carefully to the wishes of the (new generation of) consumers, many brands in this industry will perish. And, the gaps in the market will be filled by the Apples, Samsungs and the ‘many Kickstarter projects that we can expect’ of this world. A new generation has already grown up with touch screens, uses smart phones and tablet computers, and these kids will not automatically surrender their wrist to a ‘weird thing on your wrist with a strap that can only tell time’  (that maybe is possible indicated the date and if you are lucky has a chronograph)… They need a totally different method and argument of convincing to buy a watch that needs to be wound by hand, wrist movement, or even worst, can’t be charged by themselves as it has an old school battery inside…. 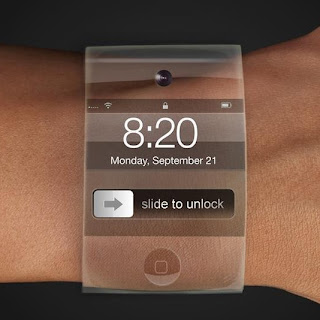 When I wrote this article the iWatch was not launched yet, and this picture shows an impression of how it could look like.

So, for now I am going to unpack my new Jawbone UP bracelet, that I am going to wear on ‘the other wrist’, as my left wrist will always be reserved for old school nostalgic mechanical wristwatches. 🙂

PLEASE DO SHARE YOUR TWO CENTS ON THIS SUBJECT HERE BELOW.

Are you getting in the mood for Olympics 2022? Wel